Think of your soil as a reservoir

We tend to think about water storage in terms of water butts, lakes, ponds and reservoirs, but soil too can hold a huge amount of water.  To help get a better feel for the amount of water needed for your plants, think of your soil as you would a reservoir. 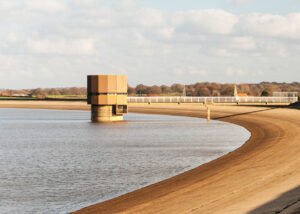 A  reservoir is designed to hold enough water for our domestic and business needs, until it rains and then it fills up again.  It doesn’t have to be full all the time, and we don’t need to worry if the level is dropping, as long as we are confident that there is enough to last until the next rainfall.  If the level is allowed to drop a little, it means we are using up the older water and replenishing it with fresh new supplies.

Similarly, the soil in our gardens and containers can be managed in the same way as a reservoir. The soil in a container, for example, doesn’t have to be full to the brim with water all the time, and allowing it to dry out a little between watering is like letting the water level in a reservoir drop so the older water is used and there is space to capture the rain.

So, we have a choice:

EITHER we fill the ‘reservoir’ to the top every time we water our plants, in the hope that we can water less frequently.

OR, we water just enough to stop the soil from becoming completely dry, to last until the next time we water.

These two different approaches are explained in the irrigation schedules below, using hypothetical data.  Both schedules assume that the initial soil moisture, the water used each day and the total volume of water added to each plant is exactly the same. 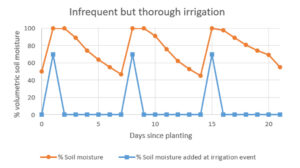 In this scenario, plants are watered just once a week, adding 70% soil moisture each time. A small amount of water is lost to drainage and then the levels of soil moisture gradually decline as the plants use the water, dropping to almost 40% v/v. When the soil is over 100% v/v some water is wasted to deep drainage, and if rain arrives there’ll be no space left in the soil to capture it and it will be lost as surface runoff or more deep drainage. Root zones in this scenario swing between moderately moist and very wet. 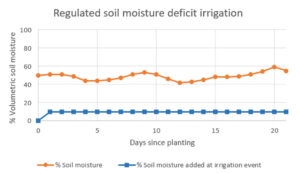 In the second irrigation schedule, the ‘reservoir’ is never fully topped up, and the soil is kept consistently moist but never saturated.

In this second irrigation schedule, plants are watered every day, but with much smaller volumes than in the first schedule, adding just 10% soil moisture at each irrigation event. The soil is never full to overflowing, which means that the moisture deficit of around 40-60% is maintained so the rootzone is kept aerated, nutrients are not lost, water is not wasted, roots are kept moist rather than being saturated, and there is plenty of space for the soil to hold rain if it comes.

On some days, the irrigation volume is not enough to replenish the water lost the previous day, but on other days, when the water use is lower, soil moistures are restored and the soil reservoir gets topped up a little.

So, this gives us a list of watering dos and don’ts to save water, garden sustainably and help your plants to flourish:

(It is worth noting that these scenarios haven’t taken into consideration the effect of water lost through surface evaporation which could increase water use, or the effect of the plant hormone Abscisic acid  that may reduce a plant’s water needs during periods of drought.)